My Pleasure Via Your Punishment 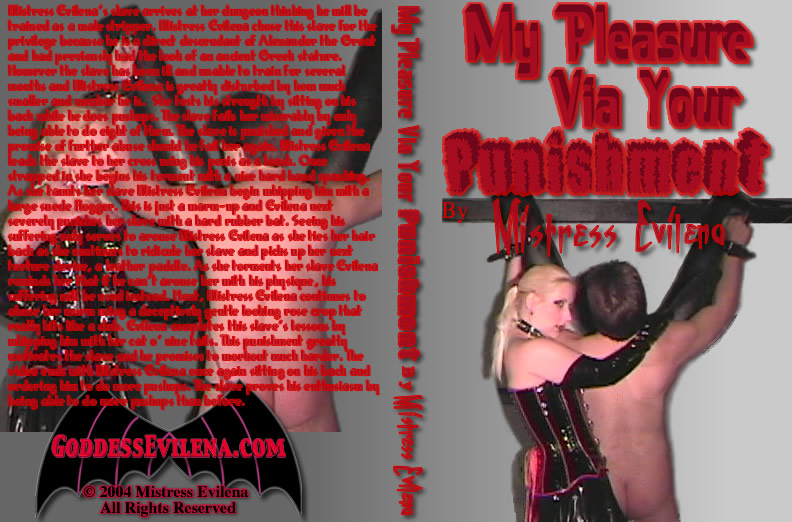 Description: Mistress Evilena’s slave arrives at her dungeon thinking he will be trained as a male stripper. Evilena chose this slave for the privilege expecting him to live up to his potential as a direct descendant of Alexander the Great. Previously he had the look of an ancient Greek stature, Evilena presumed he would return to her looking like a model. However the slave has been ill and unable to train for several months. Mistress Evilena is greatly disturbed by how much weaker he is when she tests his strength by sitting on him while he does pushups Having failed her miserably the slave is punished and given the promise of further abuse should he fail her again. Mistress Evilena leads the slave to her cross using his penis as a leash. Once strapped in she begins his torment with a nice hard hand spanking. As she taunts her slave Mistress Evilena begin whipping him with a large suede flogger. However, this is just a warm-up and Evilena next punishes her slave with a hard rubber bat. This really hurts the slave who isn’t the least bit masochistic. Seeing his suffering only serves to arouse Mistress Evilena as she continues to ridicule her slave and moves on to her next tool, a leather paddle. Mistress Evilena then continues to abuse her worm using a deceptively gentle looking rose crop that really hits like a club. Evilena completes this slave’s lessons by whipping him with her cat o’ nine tails. As she torments her slave Evilena reminds her that if he can’t arouse her with his physique, his suffering will be used instead. This greatly motivates the slave and he promises to workout much harder, proving his enthusiasm with more pushups.
Available as Download!
Formats: DVD, iTunes Mp4 download
Price: $30.00